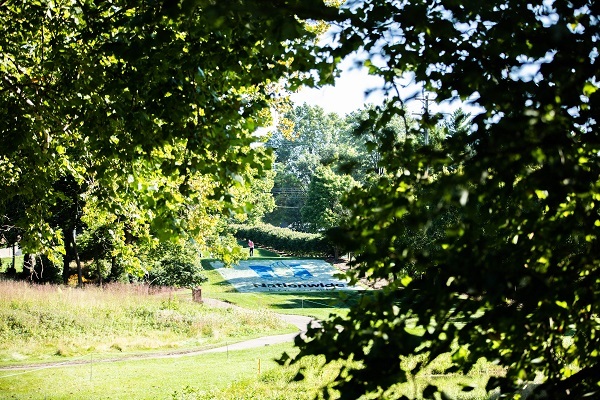 This year marks the 13th playing of the Nationwide Children’s Hospital Championship, where the future stars of the PGA TOUR play in Columbus, and simultaneously support Nationwide Children’s Hospital. Since its inception 12 years ago, this tournament has raised nearly $11.5 million for the hospital, $2.1 million in 2018 alone. This most recent $2.1 million donation is the largest single-season charitable donation raised for the hospital in tournament history and the second time the $2 million mark has been surpassed!

“These important donations were raised thanks to the support of the tournaments’ three corporate sponsors – American Electric Power (AEP), Worthington Industries and Nationwide, as well as businesses both in the hospital’s home of Columbus, Ohio and across the country,” said Mike Boyd, Nationwide’s senior vice president of Marketing and president of the Champions of the Community.

The tournament, held at the Ohio State University Golf Club’s Scarlet course from Aug. 15-18, showcases the future talent for the PGA Tour. Many current PGA Tour members have played in this tournament as part of the Korn Ferry Tour, including Jason Day, Jordan Spieth, Justin Thomas, Rickie Fowler and Dustin Johnson.

This tournament is a chance for the players to compete for their PGA TOUR card, so the competition should be fierce as they’ll be playing to earn the right to play in the 2019-2020 PGA TOUR.

We invite everyone to head to the first tee on Thursday prior to the start of competition to witness the First Shot to Fight Cancer ceremony. NCHC patient champion Alea Ramsey of Upper Arlington, Ohio will be honored for her brave battle with pediatric cancer and hit the ceremonial first tee shot to start the tournament. Alea will be present as the competition concludes for the Last Putt to End Cancer ceremony.

There’s more to do than just watch golf. This event also includes a variety of events for families. Attendees can indulge in a free concert featuring RockHouse, food trucks, free Graeter’s Ice Cream (compliments of Nationwide) on Saturday, a free pancake breakfast on Sunday, a putting challenge for charity and get autographs from the talented players. Fans can also head over to Pub 13 on the 13th hole where kids can play games and adults can get drink specials every time a player makes a birdie.

Tickets and parking are free. We hope to see you all there and look forward to the family fun, golf and raising awareness for this incredible cause.