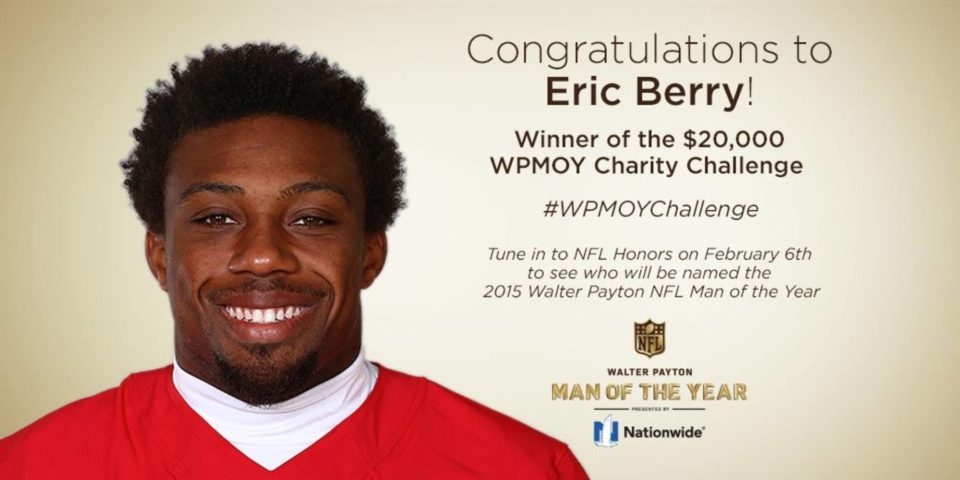 Kansas City Chiefs Safety will receive $20,000 from Nationwide for the Eric Berry Foundation

On December 2, Nationwide, the presenting sponsor of the Walter Payton NFL Man of the Year award, launched the Charity Challenge – a social media contest giving fans the opportunity to show support for their favorite Man of the Year Award nominee and offering players a chance to secure an additional $20,000 for their cause.

Fans were invited to vote for their favorite nominee by using that player’s unique hashtag on Twitter, Facebook or Instagram. The player whose unique hashtag was used the most by December 31, 2015, would receive a $20,000 donation to their charity of choice, courtesy of Nationwide.

“I’m humbled by the overwhelming amount of support from Chiefs Kingdom, Vol Nation, family, friends and those across the country,” Berry said. “This community has rallied for me since the day I was drafted here, and I am truly grateful to receive this honor. Seeing all of those hashtags was incredible. I can’t thank everyone enough.”

“Additionally, I’d like to thank Nationwide for the $20,000 donation to the Eric Berry Foundation. The funds will be used to continue our mission of providing opportunities and safe environments for kids in sports.”

In all, fans used the 32 different team nominees’ unique hashtags more than 450,000 times.

The winner of the Walter Payton NFL Man of the Year Award will be announced during the 5th Annual NFL Honors awards show, a two-hour primetime special airing nationally on Feb. 6, the night before Super Bowl 50, from 9-11 p.m. ET on CBS.

For more information on the Walter Payton NFL Man of the Year Award presented by Nationwide, please visit www.nfl.com/manoftheyear.