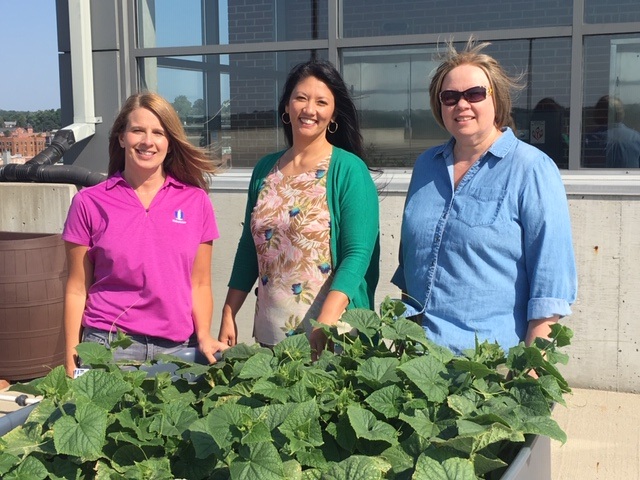 Nationwide associate Laurel Howell knows how it feels to be unsure of where your next meal is coming from.

When she was a child, her mother struggled to feed her and her three younger brothers. On good weeks, they had simple meals like meatloaf and goulash over and over again. Other weeks were more uncertain.

“I made a promise to myself that if I ever had the opportunity to ensure no other child had to feel this way, I would,” says Howell.

That inspired her to create a Giving Garden at the Nationwide Des Moines office.

With one in eight Iowans experiencing food insecurity, the goal of the garden was to grow produce that could be donated to the Food Bank of Iowa.

“I was humbled that my team was so supportive of the idea,” she says. “They rallied to make this garden happen.”

It took sponsors like Nationwide Agribusiness, funding and hundreds of experienced, committed volunteers and horticulturists for the garden to become a reality.

With the help of experienced gardeners and 170 volunteers the garden had a successful first year. It provided 52 pounds of fresh produce.

Plants are grown in food-grade plastic containers located on the roof of the parking garage, and rain barrels collect rain water to keep the plants watered. Volunteers sign up for 30 minutes each day to weed, water and tend to the garden.

Last year, the garden had its most successful year with eight garden beds growing nearly 283 pounds of produce with the help of 260 volunteers. Now, the food helps feed residents at the nearby Central Iowa Shelter & Services Homeless Shelter.

“I have learned so much as a volunteer with the Giving Garden,” says Leah Lint, a Nationwide associate. “My green thumb is a work in progress, but I have fun watching my plants flourish. It gives you an appreciation for the care and effort that goes into the food we eat every day.”