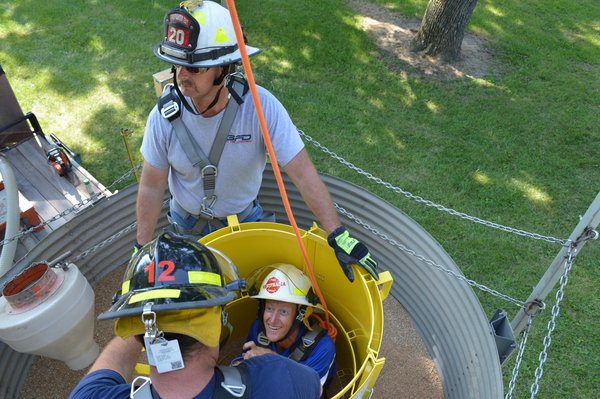 It was supposed to be just another day for Fire Chief Matt Webb.

But at 9:53 a.m. on Aug. 8, Webb heard a 911 call come in over his pager. A local farmer had fallen into a bin of rotting corn in a small, rural community of Minnesota. By the time Webb arrived on the scene less than 10 minutes later, the farmer was engulfed in corn up to his neck.

Thanks to a grain rescue tube and training provided by Nationwide almost two years earlier, Webb and other first responders were able to rescue the man in 1 hour and 44 minutes.

“It felt like an eternity,” Webb said. “But the (grain rescue) training came back quickly, and it was a relief we had our own equipment. The program that’s out there for these tubes and training is such a life-saving resource in our county.”

Webb’s fire department is one of dozens in some of the country’s top farming communities that have received life-saving grain rescue tubes and training as part of Nationwide’s annual Nominate Your Fire Department Contest. Another one of those winners — the Westphalia Fire Department in Kansas — also used their new skills in 2015 to rescue a man who had become entrapped in a grain bin.

“It only takes seconds to become entrapped in grain and less than a minute to become completely engulfed,” said Brad Liggett, president of Nationwide Agribusiness, the No. 1 farm insurer[1]. “Once grain is above knee-level, it is nearly impossible to get out without assistance. Until we can convince all farmers and other grain handlers to develop a zero-entry mentality, we will strive to make tubes and rescue training as widely available as possible.”

Since 2014, Nationwide’s annual safety contest has awarded tubes and training to 48 fire departments across 18 states. Now, these fire departments are well-equipped to help rescue people who may become entrapped in grain during the normal course of their job. A record 883 nominations were submitted this year in the fourth annual contest, and Nationwide chose 16 winners in 10 states with large rural farming communities:

For more information about the program, purpose or nomination process,
visit the Grain Bin Safety Week website or watch this video.