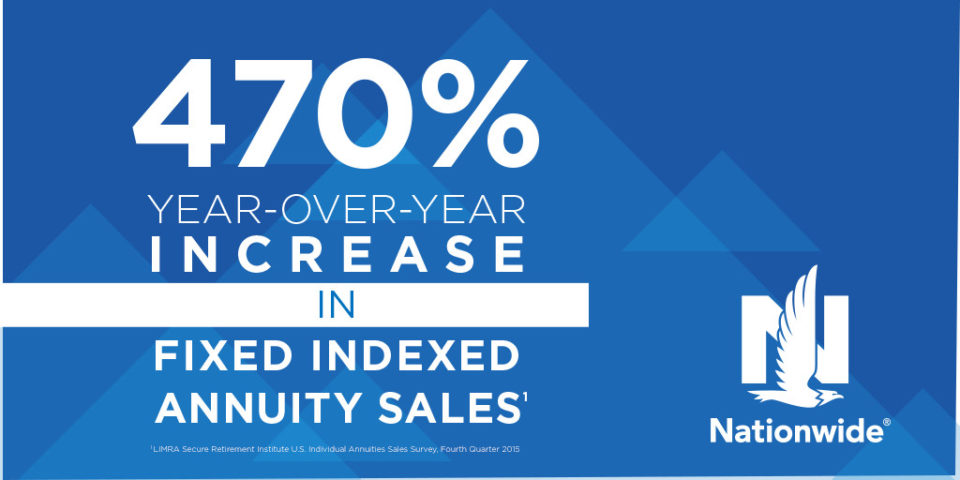 A 470 percent year-over-year increase in fixed indexed annuity (FIA) sales propelled Nationwide to a top-five 2015 ranking according to recently released annuity industry sales data1, making the company the fastest growing carrier in the top 30 FIA providers2. The dramatic increase in sales pushed the company up 17 spots from its 2014 position.

Nationwide’s market-share growth is largely the result of expanding its Nationwide New Heights® FIA lineup. In June 2015, the company introduced a suite of four New Heights FIA options, offering financial professionals the flexibility to help match the individual planning needs of each client with product differentiations that include a range of crediting methods.

“The innovation behind New Heights FIAs is that they offer earning potential beyond what’s typical with traditional fixed indexed annuities,” said Eric Henderson, senior vice president of life insurance and annuities at Nationwide.

The enhanced New Heights FIA suite also offers clients the choice of three indices, including S&P 500®, MSCI EAFE, and J.P. Morgan MOZAICSM Index (USD), a multi-asset index designed to create consistent returns based on a combination of broad diversification, positive momentum and volatility smoothing. J.P. Morgan MOZAICSM is only available as an index option within FIAs from Nationwide.

“J.P. Morgan MOZAIC’s track record of generating stable returns is a key part of what made New Heights compelling to both financial professionals and clients,” said Henderson. “When you pair this unique index with New Heights’ optional features, it presents an attractive retirement planning solution for clients looking for capital preservation and the opportunity for growth and income potential.”

Nationwide worked with Annexus, a leading fixed indexed annuity product designer, on both the suite and the initial New Heights FIA that launched in 2014.

2The top 30 carriers in 2015 fixed indexed annuity sales each had at least $100 million in sales.

Annuities have limitations. They are long-term vehicles designed for retirement purposes. They are not intended to replace emergency funds, to be used as income for day-to-day expenses, or to fund short-term savings goals. Investing involves risk.

A fixed indexed annuity is not a stock market investment and does not directly participate in any stock or equity investment. It may be appropriate for individuals who want guaranteed interest rates and the potential for lifetime income. Guarantees are subject to the claims-paying ability of the issuing insurance company.

The “S&P 500” is a product of S&P Dow Jones Indices LLC (“SPDJI”), and has been licensed for use by Nationwide Life and Annuity Insurance Company (“Nationwide”). Standard & Poor’s®, S&P® and S&P 500® are registered trademarks of Standard & Poor’s Financial Services LLC (“S&P”); DJIA®, The Dow®, Dow Jones® and Dow Jones Industrial Average are trademarks of Dow Jones Trademark Holdings LLC (“Dow Jones”); and these trademarks have been licensed for use by SPDJI and sublicensed for certain purposes by Nationwide. Nationwide New Height fixed indexed annuity is not sponsored, endorsed, sold or promoted by SPDJI, Dow Jones, S&P, their respective affiliates, and none of such parties make any representation regarding the advisability of investing in such product(s) nor do they have any liability for any errors, omissions, or interruptions of the S&P 500.

The product referred to herein is not sponsored, endorsed, or promoted by MSCI, and MSCI bears no liability with respect to any such product or any index on which such product is based. The Contract contains a more detailed description of the limited relationship MSCI has with Nationwide and any related funds.

The J.P. Morgan MOZAICSM Index (USD) (“Index”) has been licensed to Nationwide Life and Annuity Insurance Company (the “Licensee”) for the Licensee’s benefit. Neither the Licensee nor Nationwide New Heights® Fixed Indexed Annuity (the “Product”) is sponsored, operated, endorsed, recommended, sold or promoted by J.P. Morgan Securities LLC (“JPMS”) or any of its affiliates (together and individually, “JPMorgan”). JPMorgan makes no representation and gives no warranty, express or implied, to contract owners taking exposure to the Product. Such persons should seek appropriate professional advice before making any investment. The Index has been designed and is compiled, calculated, maintained and sponsored by JPMS without regard to the Licensee, the Product or any contract owner. JPMorgan is under no obligation to continue compiling, calculating, maintaining or sponsoring the Index. JPMorgan may independently issue or sponsor other indices or products that are similar to and may compete with the Index and the Product. JPMorgan may also transact in assets referenced in the Index (or in financial instruments such as derivatives that reference those assets). These activities could have a positive or negative effect on the value of the Index and the Product.

Neither Nationwide or any of its affiliates are related to, or affiliated with J.P. Morgan, Standard & Poors or MSCI.