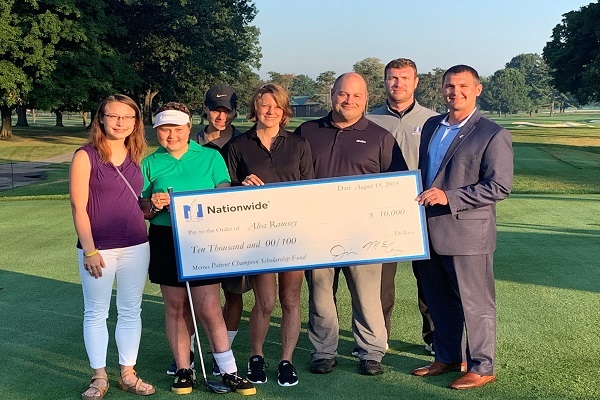 Each year at the Nationwide Children’s Hospital Championship tournament, one child who has exhibited resilience and strength in the face of pediatric cancer is honored with the distinction of being named the tournament’s Patient Champion.

In May 2018, Ramsey had just celebrated her 13th birthday and was experiencing pain in her left leg, what the family suspected could have been a ligament issue. The x-ray revealed Alea had a tumor. She was diagnosed with Osteosarcoma, a rare form of cancer which was attacking Alea’s bones and lungs. Alea was admitted to the hospital at the end of May 2018, spent more than 300 days in the hospital, and went through six major surgeries, including removal of tumors on her bones as well as total knee replacement surgery. Through it all, she battled 25 rounds of chemotherapy over the course of 15 months.

Now 14, Alea is in remission and has maintained a positive attitude with the support of her family and friends. She is determined to continue her passion of dance and pays weekly visits to her physical and aquatic therapists.

To honor her fight, Nationwide, a founding partner of the NCHC, surprised Alea Thursday morning with a $10,000 college scholarship. Alea received the scholarship shortly after hitting the tournament’s First Shot to Fight cancer, the ceremonial tee shot signifying the beginning of competition.

“There aren’t enough words to express my thanks to Nationwide and Nationwide’s Children’s Hospital,” said Alea. “The doctors and staff at the hospital saved my life and I couldn’t have asked for better people to help me through my battle with cancer. I’m so grateful for my family and friends and their support. I couldn’t have made it without them.”

“Nationwide is very proud of our 60-plus year relationship with Nationwide Children’s Hospital, America’s largest children’s hospital and pediatric research center,” said Jim McCoy, associate vice president of sports marketing and sponsorships at Nationwide. “Alea’s story is one of perseverance and triumph. We’re thrilled to be able to present this scholarship to her as our way of paying tribute to every patient and family that has been touched by the amazing work being done by the doctors, nurses and staff at the hospital.”