Poulson has mentored fellow agriculture professionals and made life-long impacts on his students during his 38 years in the profession. An Ohio State University graduate with a bachelor’s in animal sciences and a master’s in agricultural education, Poulson challenges his students to try something new, which has guided some to become agriculture educators themselves. He was also recognized this year by the Ohio Association of Agricultural Educators with the Teacher Mentor Award.

“This award represents the entire Pettisville community because it takes a team effort to teach our students,” said Poulson. “It’s very positive for our future that Nationwide and Ohio Farm Bureau recognize the efforts of all the agriculture teachers across Ohio.” 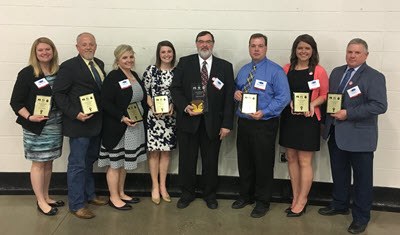 Nationwide established the Golden Owl Award to honor teachers and support them with additional resources to assist their continued educational efforts. Alongside a trophy, Poulson will receive a total $3,000 to further develop his programs to provide optimal student learning.

“We’re proud to recognize and support outstanding teachers like John Poulson for their dedication to agriculture education,” said Brad Liggett, president of agribusiness for Nationwide. “Throughout his career, John has inspired the next generation of agricultural leaders and we are honored to award his nearly four decades of service.”

The Golden Owl Award helps shed light on the importance of agricultural education and the tremendous contributions of teachers. As the number one farm insurer in the United States¹, Nationwide aims to bring attention to the growing need for agricultural educators. This effort is the result of a partnership between Nationwide, the Ohio FFA and Ohio Farm Bureau.

The Iowa Golden Owl Award winner was announced in April.