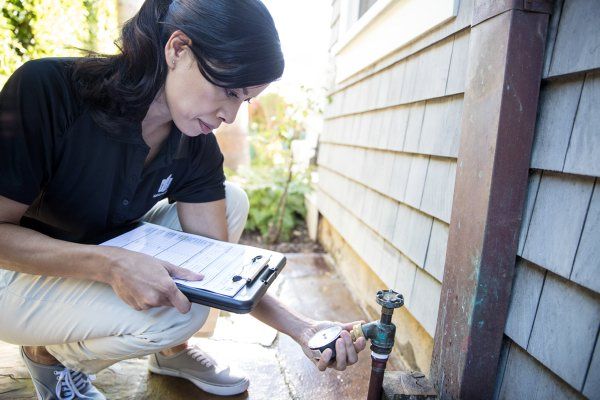 House inspections are critical to vetting any potential problems. There can be issues even with what seems like a dream home. From electrical hazards to cracks in the foundation to signs of flooding, prospective homeowners need to be on the lookout for flaws that can spell trouble. Catch some of these early enough in the process and you can still get the home of your dreams — with the seller making the needed fixes. Here are some important home inspection tips for buyers:

Check out the exterior

When touring the house, try to look beyond the overall aesthetics for clues there may be issues that need prompt repair. Start with the outside. As you’re walking toward the home, look at the roof. Are there any shingles missing? Are the edges curling or is the roof sagging? Even if it’s just the shingles, it may still run thousands of dollars. A sagging roof line, though, is a structural issue, indicating that rafters may need to be reinforced at a significant cost.

Also, be sure to check out the driveway, sidewalks, porches and patios while you approach the house, with an eye toward spotting cracks or sunken spots. These can amount to a hefty repair bill. But if, prior to signing a contract, you alert the homeowner, he may take care of it himself.

When you get close to the house, look down toward the basement for indications of structural problems such as gaping cracks in the walls. If these are just hairline cracks in one small area, not to worry; that’s common particularly in older homes. The good news is that 90% of cracking is usually due to different rates of expansion of various building materials.

However, wider cracks, large enough to stick your fingers into, may mean that the house is settling because of poor soil conditions — a troubling sign. If this is the case, you’ll probably also see cracks upstairs, particularly over windows and doors.

How to spot water damage

You also want to be mindful of any signs of water damage because this can lead to other issues such as mold. Outside the home, check to see which way the grading slopes. Is it toward the foundation or away from it? If it’s toward the foundation, ask if the owners have made any provisions for special drainage in vulnerable places to compensate for flooding.

Look at the electrical system

Check the electrical system. If this is outdated or faulty, it could mean some inconvenience such as only being able to run a couple of electrical items at a time, or worse, it could lead to shock, electrocution or fire. Fortunately, this, too, can be corrected ahead of time if it is detected.

Also, don’t forget about what you can’t see, such as radon. The testing, which costs around $150, shouldn’t be passed up. This odorless gas is a carcinogen, which can cause trouble at levels as low as 4 parts per billion of a liter. Remedying radon exposure may involve using a mitigation system to channel the radon out of the house. In the end, if you really like a home despite a few serious issues, you don’t necessarily have to walk away. Keep in mind that most things can be fixed, and often an eager seller will step up and make the needed changes or offer you a better deal so you can fix these on your own.

If you are really interested in a home, consider getting a professional inspection earlier in the process rather than later, thereby avoiding unnecessary arguments. This way you can alert the sellers, allowing them to remedy any issues and avoiding confusion later as to whom may be responsible.

Asking the right questions can also reveal important information about a house. Here are 7 smart open house tips to further help you find the perfect home.