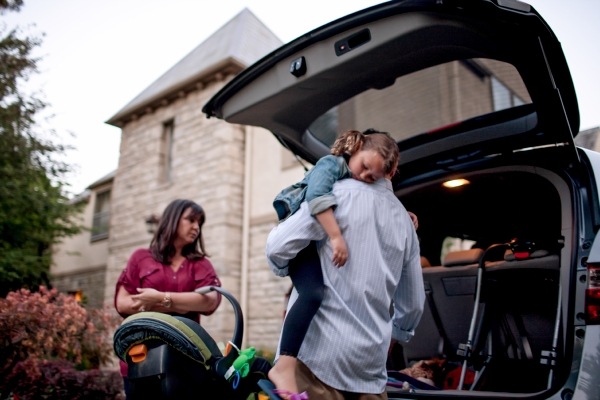 For the last 40 years, two-car families have been the norm in the United States. And it hasn’t been uncommon for some families to own three or more cars

But auto-industry experts now say societal and technological changes could spell the end of the two-car family.

“Right now in the U.S., 57% of households have two or more cars,” says Gary Silberg, KPMG’s national sector lead partner for the automotive industry. “But I think we’re going to see that change. The rationale for ownership is changing. We’re getting to the point where maybe you only need one car instead of two.”

Silberg predicts that by 2040 the share of two-car families will decrease to 43% – and that percentage will continue sliding. Two major forces that are driving the change, he says: self-driving cars and the growing popularity of on-demand, ride-share services.

A car has long been viewed as more than just a means of transportation in American culture. It’s often been a symbol of a person’s taste or affluence. However, for many Americans today the economics of car ownership no longer make sense, Silberg says.

“Spending approximately $30,000 for something that loses 11% of its value the minute you drive it off the lot, and then sits idle 90% of the time, isn’t the most rational economic decision,” he notes.

The realization for many, according to the Los Angeles Times, is that cars are “one of their most underutilized – but most expensive – assets.”

As new alternatives to driving appear and the use of mobile communication devices increases, owning a car is becoming less of a necessity, according to Silberg. Today, more people live in urban areas than in rural settings, which makes mass transportation and emerging alternatives more accessible.

“In urban areas, the cost of vehicle ownership tends to be much higher, and other alternatives ranging from bikes to mass transit to mobility on demand much cheaper and more convenient,” Silberg says.

If the overall cost of purchasing and owning a car seems expensive, you want to find ways to save. Affordable car insurance with many opportunities for discounts is a great place to start.

Ride-sharing services have made getting around in urban areas easier than ever. But the concept isn’t as new as we might think. In 1914 a Los Angeles-based car salesman named L.P. Draper came up with an innovative solution to the long lines of people waiting for rides on the trolleys.

Draper put a sign on his car and offered to take passengers where they needed to go for a nickel. Within a year, operations had expanded and his fleet was averaging 150,000 passengers a day in Los Angeles, 50,000 a day in Seattle and 45,000 daily in Kansas. But as cars became more accessible the company faltered, and by 1919 it had disappeared.

According to Uber CEO Travis Kalanick, that model is being resurrected through ride-sharing services that are going to continue evolving with the addition of components such as carpooling and, eventually, self-driving cars.

“With the technology in our pockets today, and a little smart regulation, we can turn every car into a shared car,” Kalanick said in a TED talk in February.

Who needs a driver?

Driverless cars, which until just three or four years ago seemed like a fantasy reserved for science fiction, are creating another ripple in the waters of change. When combined with the ride-sharing and on-demand mindset, self-driving vehicles may change the dynamics of car ownership in ways that present a wide range of opportunities for both technology and automotive companies.

The potential shift in the automotive market brought about by self-driving vehicles is something already being studied at the University of Michigan. Through an initiative involving government and auto-industry representatives, the school’s Mobility Transformation Center is working to make its home base of Ann Arbor the first city to have a fleet of networked, self-driving cars. The mobility center is creating a 30-acre test area to allow researchers to study how the cars will act in a city environment, in hopes of having the program operating in 2021.

The Michigan model could result in Ann Arbor residents not needing to own vehicles. They could use technology to summon a car when needed and the driverless vehicle would pick them up, take them to their destination and then move on to the next passenger. Larry Burns, a former General Motors research chief and a professor at the University of Michigan’s College of Engineering, says such developments would eliminate the current state of cars sitting idle and taking up parking spaces while not in use.

Analysts are also pointing to changes in the habits of young people entering their licensed-driving years as additional factors influencing car ownership. While earning a driver’s license and getting a car has long been a much-anticipated teenage rite of passage, many millennials say they are content with a car-free lifestyle. A study by the research firm Penn Schoen Berland found that more than half of millennials like the idea of sharing rides, and more than one-third were willing to rent out their cars.

The study’s findings prompted its author, Andrew Hare, director of digital research and strategy at Magid, to paint a picture of a new landscape for the auto industry.

“Even if only a modest number of consumers begin to prioritize car-sharing over ownership, the car industry is in trouble,” he wrote.