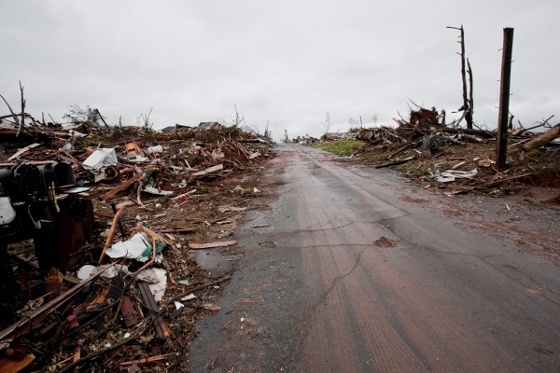 Hollywood tornadoes may whisk you away in the air to the magical land of Oz, but real-life twisters and other severe weather can destroy an entire neighborhood in minutes.

Here are some of the largest, fastest and most destructive tornadoes in United States history.

In May of 1896, a massive tornado caused damages that totaled $2.9 billion when adjusted for inflation.

The longest recorded tornado journey in U.S. history was the Tri-State Tornado of 1925, which traveled almost 220 miles across southeastern Missouri, southern Illinois, and southwestern Indiana during its 3.5-hour life. The average tornado travels about 5 miles.

If you watched the 1990s classic Twister, you might remember that tornadoes are rated on the Fujita scale, which goes from F0 – F5. The Oklahoma City tornado of 1999 was rated an F5, and its winds reached around 300 mph.

Longest distance a person was carried by a tornado: Matt Suter

This real-life Dorothy was picked up and carried 1,307 feet in 2006. It’s not quite to the Emerald City, but flying the length of more than 4 football fields and living to tell about it is pretty impressive.

The destructive force of these record-breaking tornadoes is hard to guard against, but tornadoes of this size are unusual. Keep in mind that there are ways to prepare for tornado season. Check out our tornado preparation tips and infographic for more information on protecting your family and property from extreme storms.