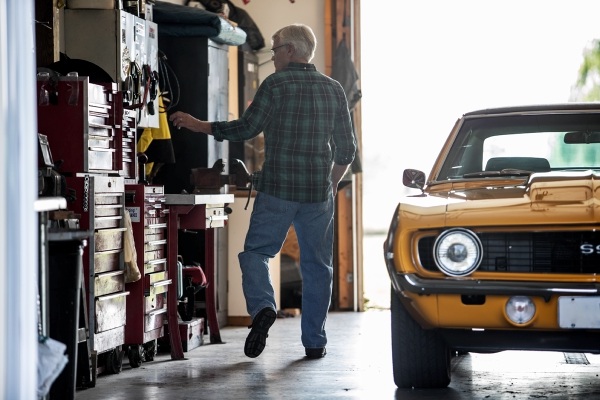 If you just purchased a new-to-you vintage car, or if your current vehicle needs some light upgrades but you just don’t know where to start, here is some good news! These are ten common, easy-enough enhancements that will inspire confidence and get you on the road!

1. Tires make the world go ‘round.

Since tires provide traction and allow your vehicle to accelerate, brake and turn efficiently, it only makes sense that worn or underinflated tires and bad alignment might reduce fuel economy. At worst, you might also be causing expensive suspension damage. Air pressure fluctuates with temperature changes, so check your tire pressure monthly for optimum handling and gas mileage. If the car seems a bit shaky driving down the road it is also well worth checking the alignment.

It’s where the combustion begins: Spark plugs ignite the air/fuel mixture flowing through your engine’s combustion chambers. Keeping them new and fresh results in a happier engine that will run cleaner, more efficiently and produce more power.

4. We need oxygen to breathe.

In addition to filters, most cars produced after 1980 have oxygen sensors that monitor exhaust flow before and after the catalytic converter. The sensor measures whether a car is running rich or lean based upon the amount of oxygen passing through the sensor. A faulty sensor could cause over-consumption of fuel and a poorly running engine. Sensors should be replaced on vehicles with more than 100,000 miles regardless of symptoms.

The mass airflow sensor is another important piece of the puzzle, even though it is commonly overlooked. It measures the engine’s air flow and sends that information to the engine’s computer, which then regulates fuel injection, the ignition system and transmission shifting. When it gets dirty or becomes faulty, it can cause a multitude of issues such as an engine that is difficult to start, engine stalling after startup, hesitation or jerkiness during acceleration and unusually lean or rich idling.

In older cars, the basic gauge cluster tends to become inaccurate which can cause overheating or charging issues to go unnoticed, and before you know it, you could be stranded. Replacing the old cluster will help you identify potential problems early due to an improved systems-monitoring ability. But if changing out the stock cluster is a hassle, adding new temperature and charging gauges in a hidden location will keep any worries at bay.

Most cars from the mid-1970s and older came with a points ignition system that requires regular cleaning and adjustment of the electrical contacts to insure smooth startup and run time. Over time, the contacts can corrode and deteriorate, so to make sure your ride doesn’t leave you behind, switch to an electronic ignition system for more reliability, quicker startups and better gas mileage.

8. Your car is your biggest fan.

Getting stuck in traffic on a warm day is kryptonite for mechanical fans, but fear no more. There are several bolt-on electric fan options for nearly every vehicle, and this fix is easier and less expensive than you may think. Contrary to mechanical fans, which rely on engine speed to cool the engine, electric fans cool the engine based on a pre-determined temperature. So no matter whether you’re sitting in traffic or taking a long road trip the fan will always help maintain an engine’s optimum operating temperature. Another plus: It also frees up horsepower lost in driving the mechanical system’s belt.

This is one of the best safety investments you will make, especially if you have plans to get more horsepower out of your ride. Disc brakes are also low maintenance, finding parts is easier, and they are a bit easier to service than those old drums.

10. And while you’re in there, switch to a Dual Master Cylinder.

Older cars built before the ‘60s were blessed with a single master cylinder, and if a leak developed in the system or brake lines became damaged, the brakes could fail completely. Dual master cylinders separate the operation of the front brakes from the rear, so if one malfunctions, at least you have the other to stop the car.

Learn more from Hagerty on how to get the best gas mileage from your classic car.

Most of these enhancements are particularly useful for older cars. If you own a vintage or collector car, it’s important to keep your car in tip top shape. But even with proper precautions, you can still run into problems.  Nationwide has partnered with Hagerty to provide you the best coverage in these situations. Find out more about classic car insurance and get a quote.