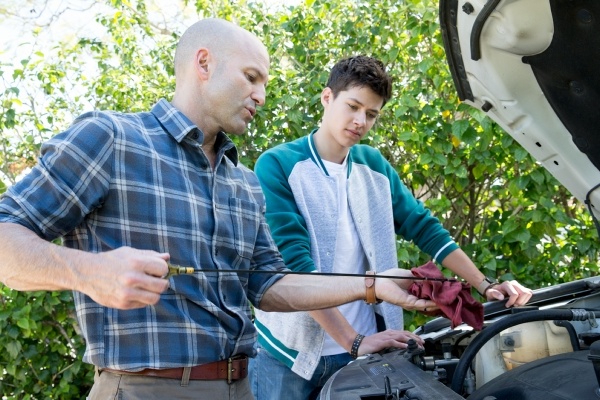 Despite their relatively easy operation, cars are actually very complex machines.  Cars need fuel to operate, but what does the engine actually do with it?

In general, a standard internal combustion engine — what the majority of fuel-powered vehicles have today — uses air combined with gasoline to produce power.[1] Of course, it gets more complicated.

Components of an engine

Before diving into how a car engine functions, it will help to learn its basic anatomy (also critical if you need to perform any car maintenance). Take a look at the car engine diagram below, then review the list of the engine’s main components and their function: 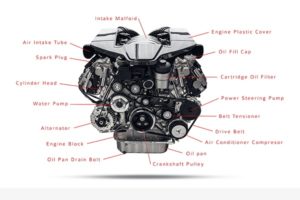 Most internal combustion engines operate in a four-step cycle process. These steps are formally known as strokes, in reference to the four movements a piston makes to complete each cycle. The strokes occur in this order: intake, compression, combustion, exhaust.

At each stroke, the piston is either on its way up or down within the cylinder, moving in conjunction with the intake of air and fuel or the expulsion of exhaust. Here’s an overview of how the process works[1]:

During the intake stroke, the piston shifts downward while the intake valve opens to let in a stream of gasoline and air. Once the piston reaches the base of the cylinder, the valves close, sealing the gasoline-and-air mixture in. (It’s worth noting that in some modern vehicles, gasoline is injected later during the compression stroke.)

At this point, the piston moves back upward to compress the gas and air toward the top of the cylinder. Pushing this mixture into a more confined space prepares it to be ignited in the combustion stroke.

Also known as the power stroke, the combustion stroke is what truly creates your engine’s power and gets the car moving. Here, the spark plug fires to ignite the gas. The resulting heat and expanding gas force the piston back down the cylinder.

While all internal combustion engines generally work the same, there are several different types of engines. When discussing engines that most commonly appear in personal vehicles, the differences mainly have to do with how the cylinders are arranged. For instance, the cylinders of inline engines are lined up straight, while in V-style engines, the cylinders are separated into two groupings and form a V shape. Other engines will adjust certain mechanics — such as the valve timing or the amount of air added to the four-stroke cycle — to create more efficiency or power.[1]

Knowing how a car engine works may prove helpful when it’s time to buy your next car, especially if you’re getting it used from an individual instead of from a dealership. Learn how to buy a car from a private seller.