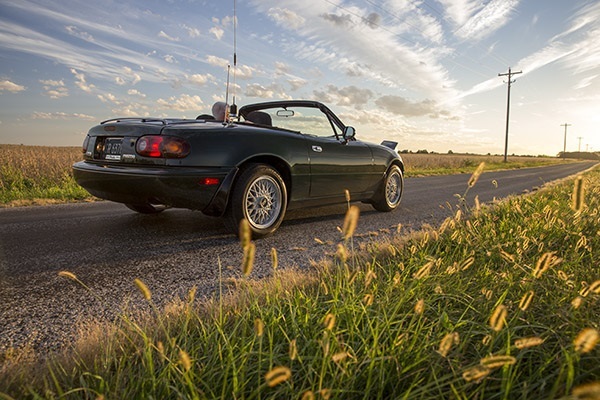 You may think your battery is powering all things electrical in your car, be it your windshield wipers, headlights or radio. In reality, it’s the car alternator that produces the majority of your vehicle’s electricity — your battery is mainly just used to start your vehicle and provide power when the engine isn’t running.[1] The alternator is a critical component of a car’s charging system, so it’s helpful to understand how it operates in case you have to deal with your car not starting.

What is an alternator?

The alternator is a generator whose purpose is to distribute electricity to the car and recharge the battery.[1] Outside of some hybrid models, all vehicles with a standard internal combustion engine will have an alternator. About the size of a coconut, the alternator is generally mounted to the front of the engine and has a belt running around it.[2]

Components of an alternator 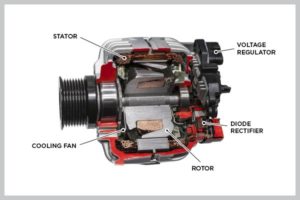 The components of an alternator are geared toward providing the right type and right amount of power to the vehicle. Your car’s charging system contains many parts, but these are the main components and their functions:

The rotor and stator are the electricity-producing components of an alternator.[3][4][5] The rotor, a cylindrical piece surrounded in magnets, spins inside of the stator, which holds a fixed set of conductive copper wiring. The movement of the magnets over the wiring is what ultimately creates electricity.

The voltage regulator oversees the power the alternator makes.[2] It monitors the level of voltage that is output to the battery and delivers power to the rest of the vehicle.

The diode rectifier converts the voltage from the alternator into a form that can be used by the battery to recharge.[2][4]

Alternators give off a lot of heat and need to be cooled to operate efficiently. While they’re built with vents and aluminum casing to better release heat, they’re also equipped with rotating fans for added cooling.[2][4] New alternator models have internal cooling fans, whereas older versions tend to have external fan blades.

How an alternator works

How the alternator produces electricity

The process of producing electricity begins with the engine. For most modern vehicles, alternators are driven by the engine’s crankshaft via a serpentine belt, though older vehicles may have a separate pulley going from the crankshaft to the alternator. The belt’s movement — the mechanical energy — spins the alternator’s rotor at a high speed within the stator.[2][5]

Electricity is made as the rotor spins. The magnets surrounding the rotor are deliberately placed so that as they pass over the copper wiring in the stator, a magnetic field is created.5 This magnetic field, in turn, produces voltage that is captured by the stator. This power then reaches the voltage regulator, which disperses electricity to the vehicle and manages the amount of voltage the battery receives.[2]

How does the alternator charge the battery?

Like any car part, your alternator can start to decline with time and may need replacement. Learn how to replace an alternator, and what to do if your car breaks down on the road.