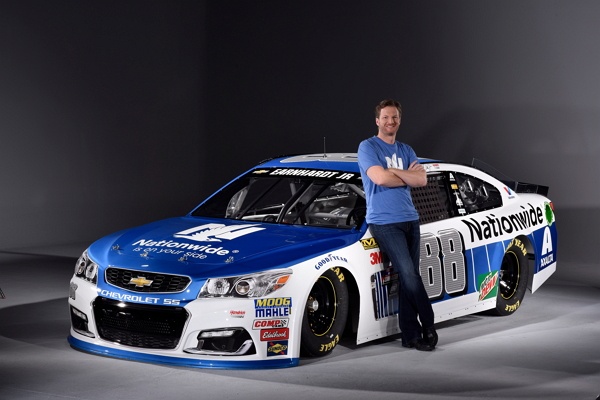 When Dale Earnhardt Jr. returns to the track next season, his No. 88 Nationwide Chevrolet SS will have a whole new look. The striking new paint scheme was unveiled Nov. 29 at Hendrick Motorsports on Facebook Live, allowing fans worldwide to get a peek at the race car’s new look. Thousands of fans tuned in to watch, and were able to ask questions and react to Earnhardt’s comments in real time.

NASCAR’s 14-time most popular driver explained that the process of designing a new paint scheme is a lengthy one that relies upon input from several different perspectives.

“I have lots of friends that I reach out to for inspiration,” Earnhardt said. “I have ideas, [Nationwide] has ideas, my crew chief has ideas – then we get everyone in the same room and these ideas move from person to person and get molded as it goes.”

That collaborative effort leads to designs that are pleasing to everyone involved, but never loses sight of Earnhardt’s distinctive personality.

“It’s a good-looking car … and I think the fans are absolutely going to love it,” he said. “It’s going to look fast on the racetrack.”

The new paint scheme has a white base coat with a Nationwide blue hood that features the Nationwide logo. That same blue is featured on the hood and in the RPM bar that runs along the door and rear quarter panels. The bar starts just behind the wheel wells on each side and meets to form a solid blue panel on the back of the car.

“The Nationwide blue is always great, looks really good on the track and will show up on TV,” Earnhardt said. Changing last year’s silver and blue colors to white and blue was done for more than mere aesthetics, he noted.

“The silver would blend into the track and it was difficult [to see],” Earnhardt explained, adding that not only was it sometimes more difficult to spot on television or from the stands, but it was challenging for spotter T.J. Majors to pick out of the pack as well.

“T.J. will love this car,” Earnhardt said. “He’ll be able to see this car coming a mile away and so will the fans.”

One of the things Earnhardt strives for in working on the designs for his cars is to make them “understandable,” he said. Many different elements have to be worked into the design scheme of the decals, such as the number, the primary sponsor and associate sponsors. At the same time, Earnhardt wants the car to reflect his personality.

“The scheme itself, I want it to be understandable once you get all the decals on it,” he said. The addition of the RPM bar, which was suggested by No. 88 team crew chief Greg Ives, helps pull this particular paint scheme together. The result is a car that looks fast even before it hits the track.

Look for the new paint scheme to make its debut when the 2017 race season kicks off on Feb. 26 with the Daytona 500.