The start of a new racing season is always an exciting time, and this year, it brings special cause for excitement. As Dale Earnhardt Jr. returns to the track for the 2017 season after missing the last half of the 2016 season, fans are more excited than ever to see the popular driver return.

As usual, the new season brings with it some changes, and those include changes that are both visible and behind the scenes. Here’s a look at some of the new things NASCAR fans will see this season.

Dale Jr. is famously involved in developing the paint schemes for his cars. This year, with input from his crew and the Nationwide team, they designed a car featuring a white base and special feature down each side.

“This basically is an idea that me and my race team pulled together,” Dale Jr. says. “It’s got what [crew chief] Greg Ives likes to call the RPM bar, so we’ll see how fans respond.”

The RPM bar is a wide blue strip that starts just behind the rear wheel wells on each side and meets to form a solid blue panel on the rear of the car. The body of the car is white, with a Nationwide blue hood featuring the Nationwide logo.

Jim McCoy, director of sports marketing for Nationwide, says the lighter color draws from Dale Jr.’s past and growing up around the track.

“You could always tell how the race went based on where the tire marks were, the dirt and everything else,” Dale Jr. explains. “On a white car you always had a better sense of that, and we’ve transitioned to a lighter paint scheme this year with more white mixed into it.”

If getting there is half the fun, it’s going to take a hauler like this. While the interior of this transporter has stayed the same, the exterior has a whole new look. Replacing the blue and silver scheme that was seen in 2016, Dale Jr. and his team are now truckin’ down the road in a predominantly white hauler that matches the car’s white paint scheme. The cab remains a Nationwide blue with the Nationwide logo on the side in white. 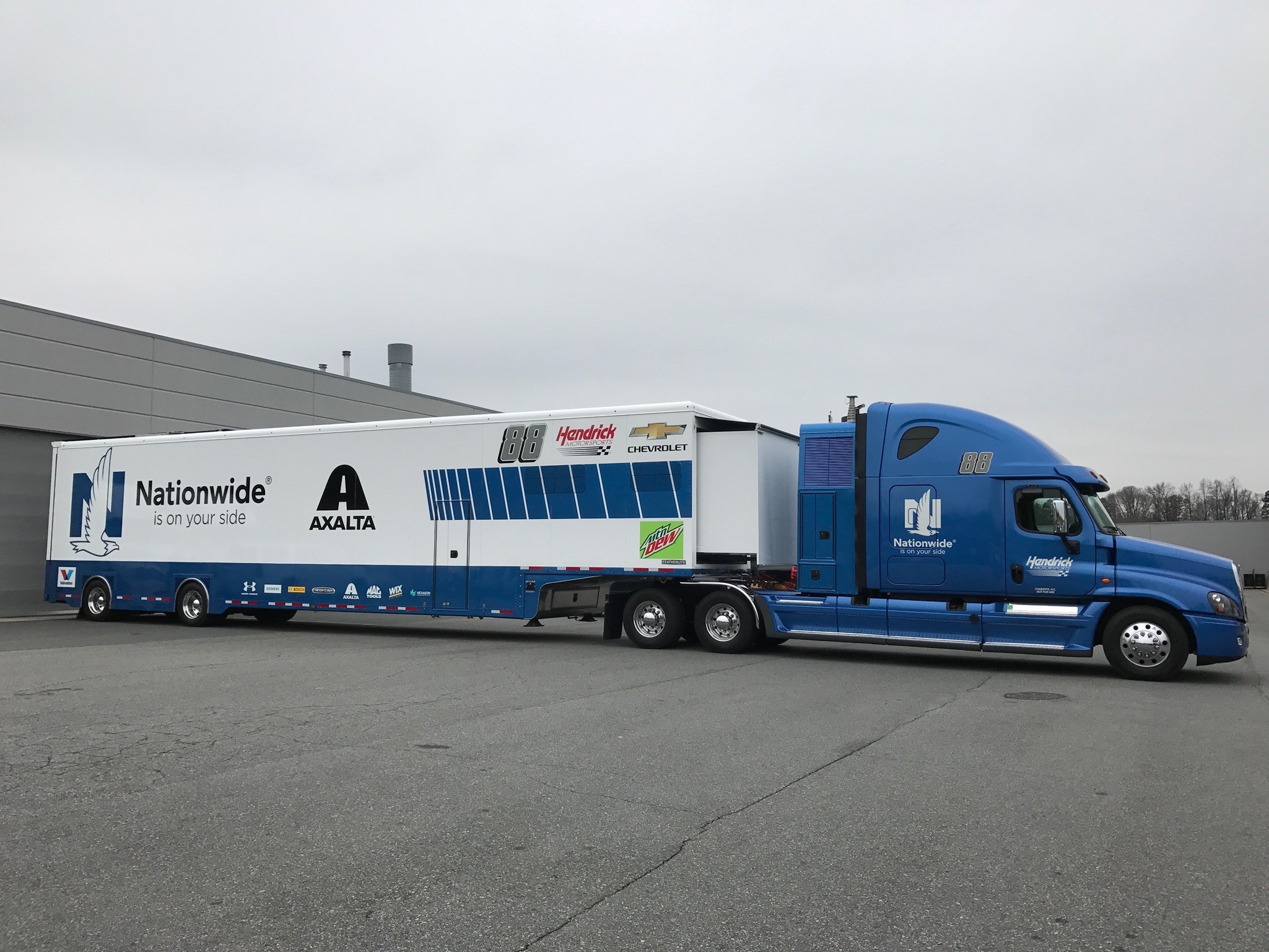 For race car drivers, helmets play an important role in protection – but they also represent an opportunity for self-expression.

“There aren’t many areas where we really get to do that,” Dale Jr. says. “The helmets have evolved quite a bit.”

Once again, his helmet is designed by Nick Pastura, an artist whose work has included concert backdrops, original artwork for Guns ‘n’ Roses, the Rock and Roll Hall of Fame and the Discovery Channel.

As helmets have changed and the technology to cool them has reinvented their size, Dale Jr. says it has given drivers more “real estate” for designs. He has worked with Pastura “from the beginning,” he says, and has always chosen a racing skulls motif. 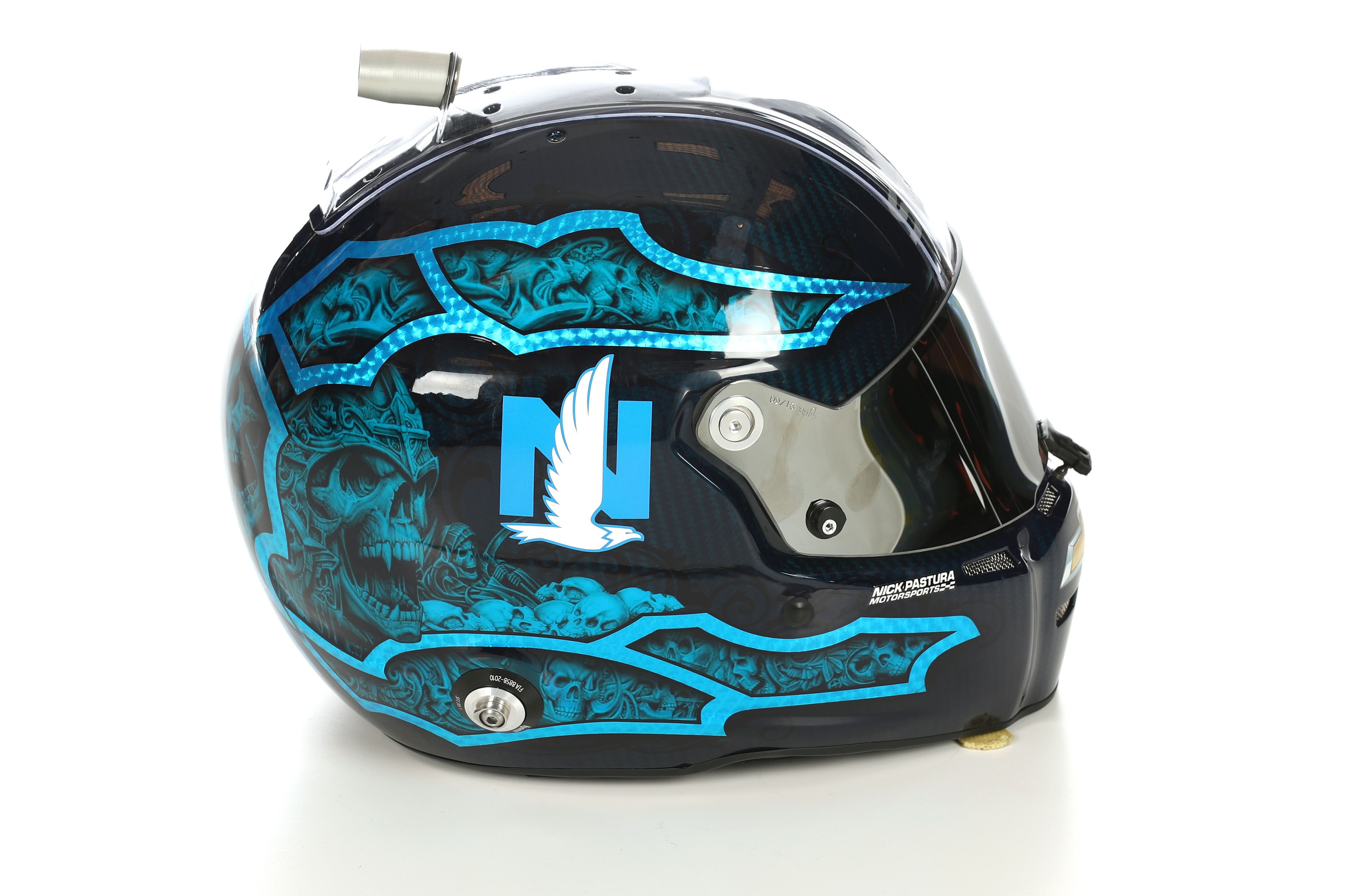 While it’s often said that clothes make the man, in this case, Dale Jr.’s firesuit is made for function rather than form. Of course, that’s no reason not to look good – and the newly redesigned firesuit this year plays off the same fresh, new look of the car.

Predominantly blue, with the Nationwide logo in white on the chest, this year’s suit trades in the gray color blocks for thinner white piping and accents to match the white body of the car. 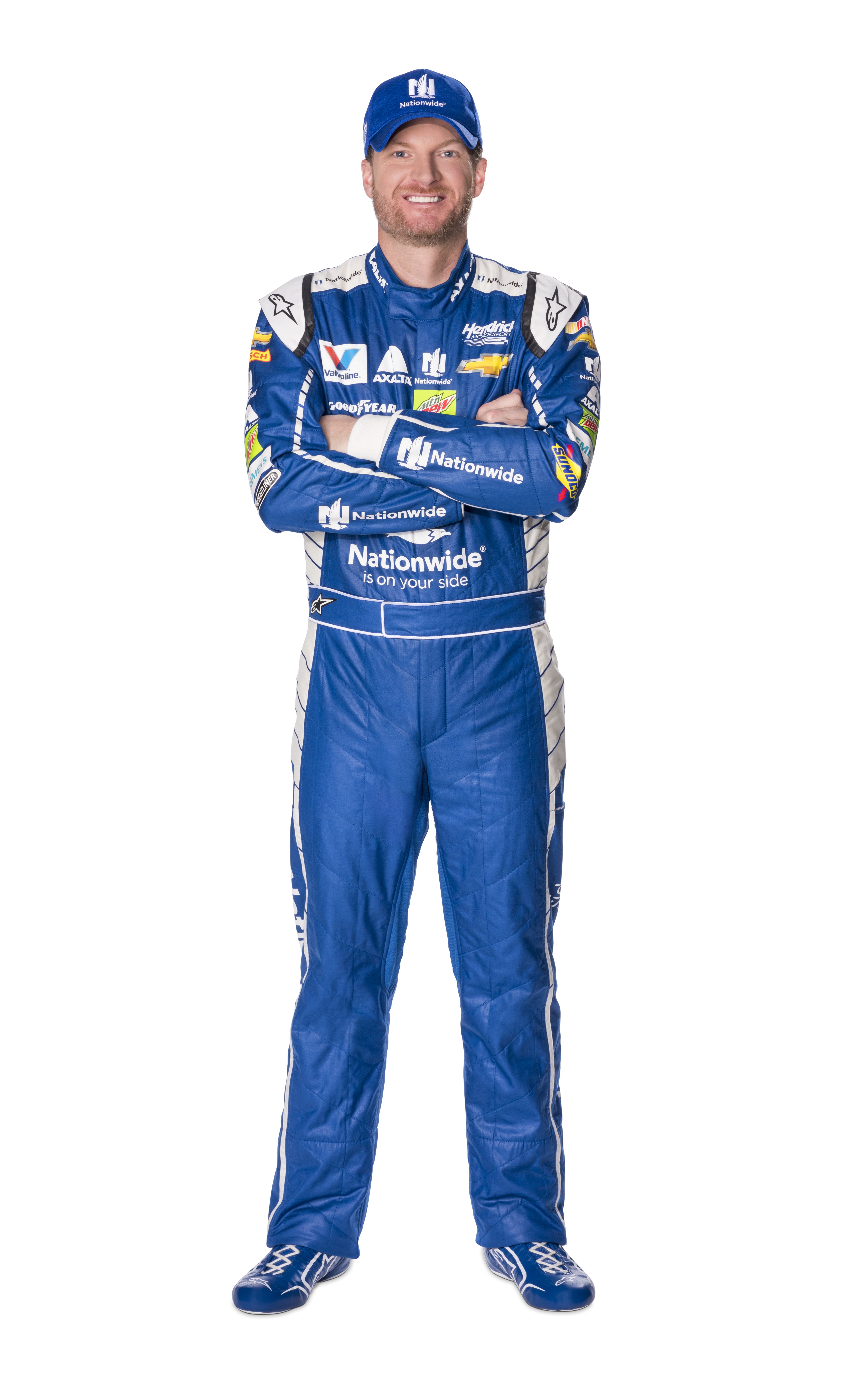