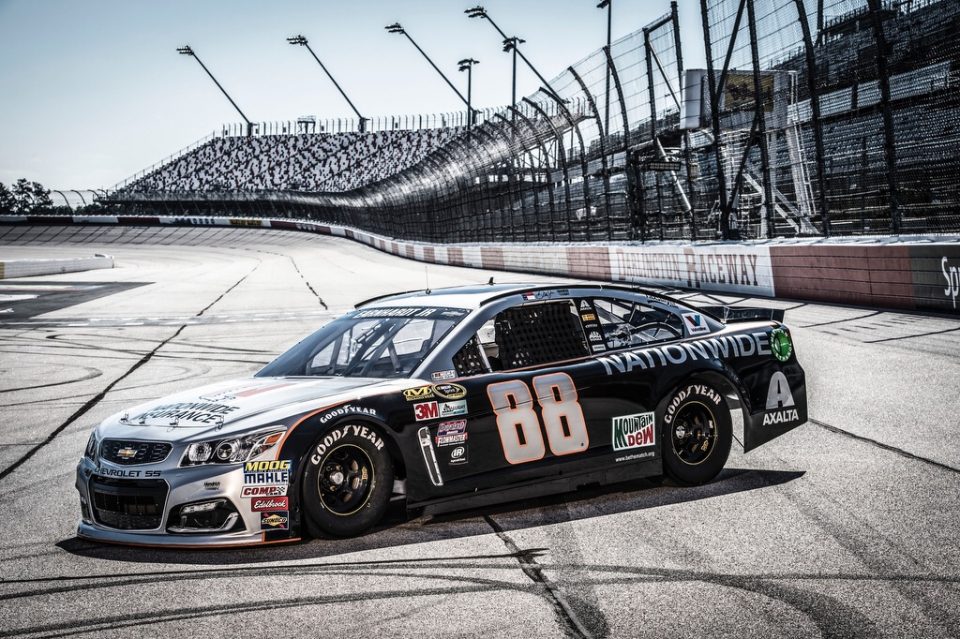 Get ready to go back in time as Dale Earnhardt Jr. and Nationwide reveal a new paint scheme for Dale Jr.’s Nationwide 88 Chevy SS. The new paint scheme will make its rounds at the track on Sept. 4 during the 2016 Bojangles Southern 500 NASCAR race in Darlington, South Carolina.

As part of that weekend’s festivities, Darlington Raceway is hosting a NASCAR Throwback weekend and asked drivers and teams to pay homage to drivers from the 1975-1984 era. Dale Jr. and Nationwide chose to base their paint scheme off Buddy Baker’s No. 28 Gray Ghost, which is the car that Baker drove to victory in the 1980 Daytona 500.

It’s no secret that Dale Jr. has a fondness for this particular paint scheme; his 2008 Citizen Soldier car shared this same paint scheme and he’s been very outspoken about his love for it.

“I ran a Gray Ghost paint scheme in 2008 and that was probably my favorite car that I’ve ever driven,” Dale Jr. says. “While the 2016 No. 88 Nationwide car is based off the Gray Ghost, I am excited to run an exact replica of the scheme in Darlington this fall.”

It’s not just the paint scheme that is going to pay tribute to that bygone era; the car’s paint also will feature colors and logos that Nationwide used during the time the original Gray Ghost was on the track. That will include the orange Nationwide Insurance logo and the “Nationwide is on your side” slogan that was first introduced in the late 1970s and remains popular today. The orange color featured in the logo aligns with the NAPA Auto Parts logo that appeared on the Gray Ghost in 1980.

Bringing the Past to Life

This is the second year that Darlington Raceway has hosted a Throwback Weekend. Last year’s race, which honored drivers from the 1970s, was extremely well received not only by the NASCAR community, but by the sports industry as a whole. The event won the National Motorsports Press Association 2015 Myers Brothers Award, which is handed out each year to recognize individuals or groups who have provided outstanding contributions to the sport of stock car racing.

(It’s also an award that Dale Jr. took home the year before, being recognized both for his contributions on the track as a driver for Hendrick Motorsports and an owner for JR Motorsports, as well as his work off the track with the Dale Jr. Foundation.)

The Throwback Weekend is part of a five-year campaign for the South Carolina racetrack, and the Southern 500 returned to its traditional Labor Day weekend date last year.  For 2016, the Southern 500 promises to capture the spirit of some late great drivers and cars, as well as celebrating the best that NASCAR has to offer today.

In addition to being able to celebrate the history of NASCAR, the race also allows Nationwide to celebrate a significant milestone.   Nationwide officially celebrates its 90th anniversary on April 14 – just two days after Dale Jr.’s throwback paint scheme is revealed.

“It’s a beautiful racecar and I’m excited to drive it,” Dale Jr. says.