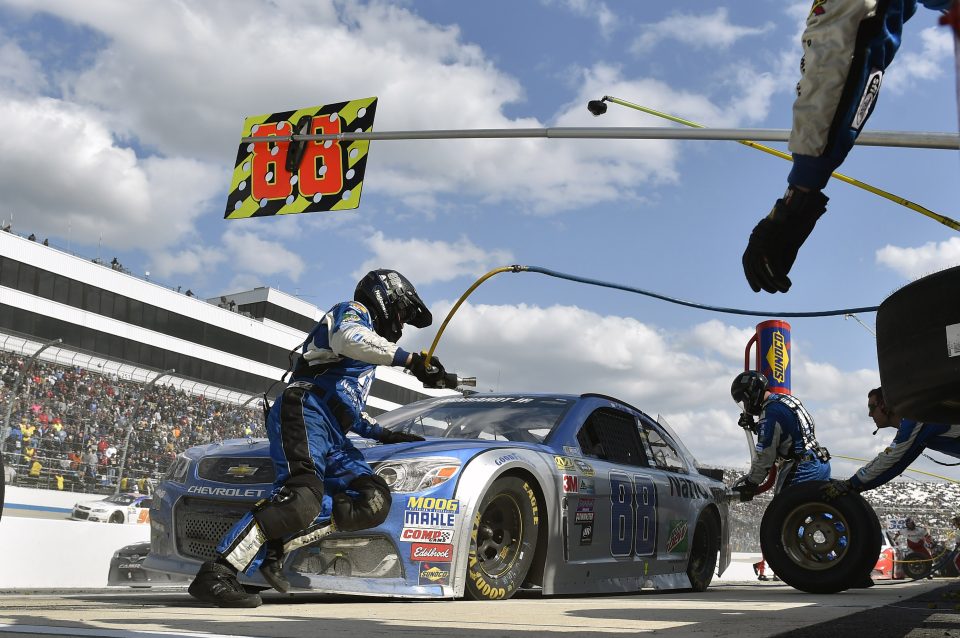 Anything drivers can do to shave off just a little more time can make a big difference at the NASCAR finish line, and that means every member of the pit crew has to be fast, agile and on top of their game at every pit stop.

How fast is a NASCAR pit stop?

A tire change in a NASCAR race happens so fast that, to most of us, it’s almost impossible to tell what they’ve done. Crews aim to make pit stops last no more than 11.5 seconds, during which time they have to change all four tires, refuel and get back on the road. The very best tire changers make a complete tire swap in four seconds.

“It’s a lot of fun [to go over the wall],” says Scott Brzozowski, front tire changer. “You still get a rush out of it when you run top-five and top-10.”

But Brzozowski says a tire changer also has to learn how to go fast without going too fast and making a mistake.

“You just have to get to a certain pace and then maintain that throughout the whole day.”

For the tire changer, every stop has 20 hits on a lug nut that have to be made perfectly. Five off, five back on; and then repeat on the other side. One of the biggest hazards for a tire changer is a hanging lugnut, which occurs when a lugnut has been loosened, but doesn’t come all the way off the stud. That can cause precious seconds as the tire changer ends up hand-turning the nut to get it off. But it takes more than just speed to become a world-class tire changer; it also takes precision.

The proper equipment plays a key role in making sure tire changers can do their job, and the team practices together to make sure each position is in top form. The front and rear tires each have a designated changer, and there’s also a front tire carrier and rear tire carrier to get the tires to the car. The jackman and the tire changer work together, using a 20-pound hydraulic jack to lift the car while the tire changer removes five lug nuts, switches out tires and then replaces the lug nuts.

While incredible hand-eye coordination is involved, the tire is also prepped to make it faster for the changer. For example, the lug nuts are already attached to the wheel with adhesive so they’ll stay in place before getting hit with the high-impact, nitrogen-powered wrench used to tighten and remove lugnuts. To help make it easier to work the lugnuts onto the stud, the studs aren’t threaded for the first ¾ inch, which allows the lugnuts to slide down farther and not become cross-threaded while the tire is being put into place.

The hardest part of the job, according to rear tire changer Jeremy Fuller, is eliminating mistakes and being sure not to miss any of the lugnuts.

“It’s a lot of pressure,” says Fuller. “You have to know what you’re doing at all times and if a mistake happens, you have to know how to execute that without making a bigger mistake.”